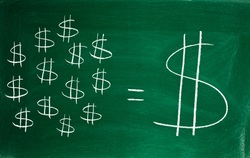 Did you happen to read the Washington Post’s article on the demise of the nonprofit Invisible Children, best known for its Kony 2012 campaign? (Check it out here) The authors posit that this single case illustrates the dangers of increasing fundraising expenses.

Not really, of course (for both the article and the facts of the nonprofit world). The article is more nuanced. Social change and policy organizations are complicated, especially those operating in Africa. For this N=1 (Invisible Children), a few significant forces (which had little to do with a surplus-based funding approach) tore the organization apart.

This single case may be an example of how a nonprofit can fail, but there is little evidence presented and no broader applicability of this piece about whether a more market-oriented funding strategy is appropriate. The article, for example, fails to mention that nonprofits tend to spend 65% or so of their budget on staff and–spoiler alert–poorly paid people don’t stick around long and often cost about a year’s salary to replace.

The loosely argued closing of the Post piece suggests that nonprofits have benefactors and not investors (which most major donors I know would challenge). As are result, nonprofits must operate on a shoe string, cow to risks over opportunities, and generally hope that their meager existence can marginally impact those benefiting from their mission. This notion is much more dangerous than better funding nonprofit operations.

It is dangerous to create an argument on an N=1 scenario. Just as the article indicates the IC may not have been quite as impactful as their messaging suggested, this piece relies too much on its own limited perspective to suggest that IC proves the dangers of better funding nonprofits. Instead, this “overhead” myth leads to the “starvation cycle” which leads to lean and under-experienced staffing which leads to more nonprofit failures than fundraising experts would care to count.

Do you have a suggestion to help the nonprofit sector build its case for better investment? I have a few tricks (for a later post) and welcome any other ideas.